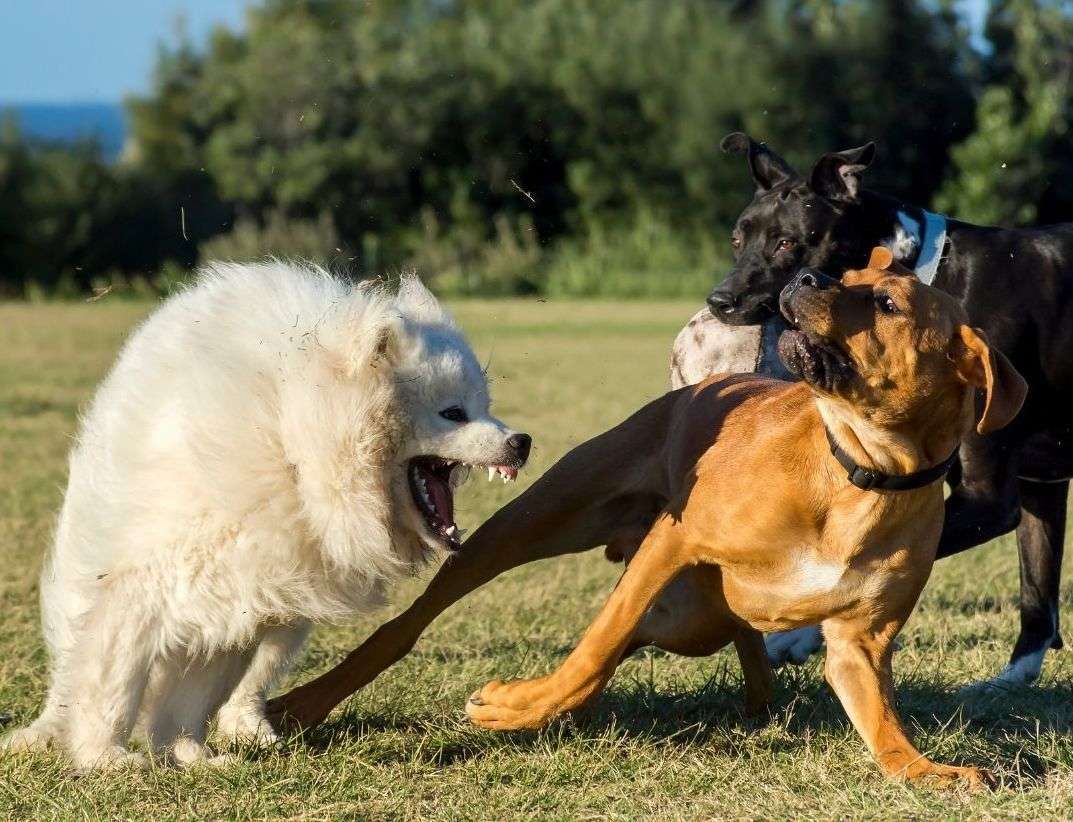 It’s one of the most common questions we get, especially (though not only) from clients with new dogs or puppies: “Is my dog being aggressive, or just playing?” There’s not one cut-and-dried answer, but here we’ll give you some pointers on what to look for to keep playtime happy.

For dogs, play isn’t just fun, it’s also how they get acquainted, and figure out who’s who in the social hierarchy. As puppies, they use play to get a feel for their abilities, gain strength and learn how they fit in. And since every dog grows up with a unique blend of their own personality, mixed with lessons learned from experiences with people and other dogs, there can be a wide range of styles and signals for playing.

In most cases, two dogs who meet will start by getting acquainted, circling while letting each other get a sniff (especially of their rear). One or both may initiate a game by pouncing or bouncing or dipping into a play bow (chin near paws and rump in the air). From there, three main signal categories often cause confusion.

At first, a growl or bark might sound like a sort of all-occasion warning, but listen to your dog more closely—and watch the body language—and you’ll start to pick up on some of the nuances.

A growl accompanied by a bow may be a playful challenge. One accompanied by a curled lip, or wrinkled muzzle, especially if they also have a stiff posture, is a red flag for a dog not ready to be sociable.

But it’s not just the sounds they make; just as most of us can tell a genuine smile from a fake one, dogs can read each other’s expressions and body language too. If you were thrust into a confrontation, what would your reaction be? Unless you’re a trained fighter, you’d likely tense up; the same is true for most canines. If a dog goes tense, adopting a stiff posture, with ears and tail taut, they’re on guard.

If you see one of the dogs start to puff up, making themselves larger, with ears and tail high, that’s also a signal that they’re in the mood to take charge, not enjoy a friendly romp.

Speaking of romping, from young to old, play will likely look and feel quite different between two dogs just getting acquainted vs those that know each other well.

We’ve seen long-time buddies get into tussles that look, for a few moments, like battles to the death but are in fact the harmless roughhousing of best friends pushing the limits.

When assessing two dogs, take a good look at the “dance” going on between them. Just as with humans, some dogs are more outgoing and boisterous, others more tentative. Happy dogs tend to be bouncier, in general.

Dogs that are playing may roll on their backs or otherwise give their play partner the upper hand for a bit. But if you’re seeing all pursuit, no give and take… if one dog is doing all the chasing and not letting the other get away—or body slamming—that’s moving into aggressive territory.

Oh—and in case you’ve ever felt nervous about a big dog playing with a small one or puppy: as long as the bigger one has learned to scale back, which you can tell by their more restrained movements, size alone shouldn’t cause any fear.

Is biting & snapping part of play or lashing out?

Play biting—the kind that’s a controlled, relaxed, open-mouth grab without any force—is a very common part of canine play. After all, without thumbs, the mouth is the easiest way to capture your prey (whether in fun or frenzy)! A soft, playful bite leaves no marks. If one participant gets carried away and accidentally elicits a yelp, the dog doing the biting immediately backs off.

But when two dogs are playing and one starts snapping, or continues pursuing the other even when their playmate seems tired, it may be time to step in. And if any otherwise playful behaviors are becoming more intense, it’s time to take a break.

Dog play doesn’t look quite like our own, but as you pay close attention and get familiar with your dog’s responses you’ll start to see the difference between danger signs and delight.

One advantage of creating opportunities for your dog to socialize with others is that they—and you—get familiar with the signs and signals of canine interaction, and learn how to moderate their behavior in response to a partner. You’re in a better position to be able to answer that question, “is my dog being aggressive?” That’s why we encourage our clients to find safe spaces to let their dogs, be dogs!

How to Get Your Dog to Behave Outside

Follow these steps to get familiar with good dog manners in public, and how to…

Why is my dog coughing so much?

Wondering “why is my dog coughing so much?” Well, just like humans, dogs get respiratory…